Farewell to our Champ Avantage On Sunday we will bid farewell to our brilliant nine-time Group 1 winner Avantage.  Her sale on Wednesday saw a new world record established for online auctions when she was knocked down to Coolmore Stud’s Tom Magnier for $4.1 million.

On Thursday, David (Ellis CNZM) visited Avantage for the very last time to say goodbye – and to thank her for everything she has done for us all in her sparkling career.

It’s very special that Viva (as we know her) will return to the place where her life began and what a life to date it has been.  The joy and the thrills her owners have had – and that the team which has meticulously cared for her has also enjoyed … we wanted share some personal thoughts on the impact, life and career of Avantage … “In a career of selecting and buying racehorses, specialising at the yearling sales, I keep records of all the sales’ catalogues.  I enjoy going back over the years to look at my notes from the time.

“This morning, I did this for the sale where I bought Avantage and my notes at the yearling parade where I saw her said: ‘very good, well developed fast looking filly.  Top physical specimen with real class.  Very strong two year old type’ and she received the highest possible rating I give.

“Steve Davis was the auctioneer at the Karaka Sale and I clearly remember him selling her to me because just as the gavel went down, someone had a bid but it was too late – I purchased her for $210,000.

“I am so happy for the brilliant team that have owned her.  We have all had so much fun together.  yesterday afternoon I went to our Matamata stable to say goodbye to ‘Viva’ (as we know her) and to thank her.  I also wanted to thank Jamie Richards, as well as Nicole Shailer and Trevor Stewart who looked after her so amazingly well.

“To do what she did and race successfully at the elite level for four seasons is a remarkable feat. Avantage exemplifies the type of racehorse I aim to buy – a horse that can run at two (she had six starts as a two year old for five wins and an unlucky second), train on and win Group races in New Zealand and Australia at three, and then improve even further to win at the elite level at four and five.

“It’s been an unbelievable ride for us all – so thank you Jamie, Nicole and Trev and the whole team at the stable and also Deane and Steph at Te Akau Stud who looked after Avantage so well when she was spelling. “To be involved with a mare who not only has won more Group 1 races than any Fastnet Rock horse in the world – and who then who sets a new world online sale record (she is the most expensive horse New Zealand Bloodstock has ever sold) it’s just a massive thrill.

“She could not be going to a better home – Coolmore, where it all began, and the Magnier family are world class operators and we are simply thrilled they secured her.

“Finally I would like to thank Karyn (Fenton-Ellis MNZM) who managed Avantage so well.  She dots all the ‘i’s’ and crosses at the ‘t’s’ – we couldn’t do it without her.” The auction spelled the end of era for two great Te Akau trained mares, after dual Horse of the Year Melody Belle, the NZ record-holder of 14 Group 1 wins, sold in May for $2.6 million at the 2021 Gold Coast National Broodmare Sale.

Each were purchased as yearlings at Karaka, by the keen eye of David Ellis CNZM, both won the Karaka Million on their way to being crowned Champion Two-Year-Old, and they went on winning races at elite level throughout their long careers.

Melody Belle won 19 of 41 starts and $4.2 million prize money, while Avantage won 16 of 28 and $2.1 million. Stable rider Opie Bosson, the national record-holder for Group 1 wins, rode both to win the Karaka Million and was aboard in 11 of their 23 Group 1 victories. The fact both mares, like Probabeel currently in Australia, were able to keep coming back, winning year after year is testament to the quality yearlings David Ellis CNZM selects as well as to the people, systems and individual horse management that Te Akau Racing has in place. Nicole Shailer – stable foreman for Avantage’s barn said – Nicole spent as much time looking after the mares as anyone.

“It was mixed emotions while we were watching the auction, exciting and sad at the same time.

“The retirement of Avantage and Melody Belle leaves a big gap and they are two mares that for anyone would be hard to replace.

“It wasn’t just that they won so many Group 1 races, but the way that they won them. It wasn’t as if they just got there. They’ve gone out and won them impressively and shown how dominant they were on the race tracks, so it’s sad we won’t be seeing them again.

“There are obviously many more good horses coming through the stable but to be up there with those two is going to be quite a feat.

Reflecting on a key performance by each mare, Shailer said: “Definitely the last Group 1 win with Melody Belle, when I strapped her to win the Group 1 Bonecrusher Stakes in March at Ellerslie. I think that had to be the highlight of my racing career, with her breaking Sunline’s Group 1 record and getting to 14.

“Avantage, I think probably the Group 1 BDC Sprint in February this year at Te Rapa. The way she won that, charging clear, was a real highlight.”

David Ellis CNZM has often said that he tries to buy horses that run as two-year-olds if they have natural ability, but importantly must have the scope to train on at three, four, five, and as six-year-olds, and in Avantage and Melody Belle he had two prime examples.

“It was a combination of the type of horses they are and the quality of the management at Te Akau,” Shailer said. “They were never asked to do more than was required of them in any prep. They were well looked after. If they needed time they went out to spell. We have the best vets and farriers, and all those things enable them to keep racing to that age and at that level.

“It’s a huge feat for these horses to keep going, and heading into the Group 1 with Avantage last weekend, before the injury, I honestly thought on her work Thursday morning that she would be impossible to beat. Unfortunately, it was just one of those things that obviously happened.

“If she wasn’t injured, I think she could have been right up there again this season and pushing the 14 Group 1 wins that Melody Belle had.

“They were two massive mares and, gee, they’re going to be missed around the place. Even this afternoon, I had Avantage out of the box for Dave (Ellis CNZM) to be photographed with and she was still kicking up a fuss and being her boisterous self. She’s still got all her character, and once she gets on the plane on Sunday it’s going to be interesting to see who fills her box.

“I think to see our owners coming back into other horses and reinvesting so enthusiastically with us, speaks volumes for Te Akau, and we obviously need them to keep purchasing the horses.” While the perils of technology are being called out in many quarters, what transpired through Gavelhouse Plus this week was quite staggering.

Just days after the pre-post favourite for the Group 1 Tarzino Trophy last Saturday at Hastings had incurred a retirement forcing tendon injury, wheels were in motion with New Zealand Bloodstock’s online elite sale platform Gavelhouse Plus to showcase and offer the nine-time Group 1 winning mare to the world.

Many would have tuned in prior to the 7.01 p.m. auction closing time on Wednesday 22 September to witness a bidding dual that, spanning 15 minutes, escalated from $1.85 million to finish at $4.1 million.

Under their nom-de-plumes: Danehill1986 and Harris, these two heavyweights slugged it out, with their relentless hefty bids providing a surreal screen watching experience.

When all was done, the six-year-old mare will head back to Coolmore Australia where she foaled, courtesy of the staunch resolve shown by Tom Magnier (aka Danehill1986) to acquire her with Yulong believed to be the underbidder.

Although it could not be described in the same breath as the temperature rising pure theatre of subsequent Group 1 ATC Derby winner and stallion Don Eduardo (Zabeel), selling as a yearling in 2000 for $3.6 million through the ring at Karaka, it certainly gave rise to the power and efficiency of a platform like Gavelhouse to get the job done – in a brilliant manner. “It was very timely – every day that goes by in the breeding season, which we’re in now, is crucial, and to turn it around from last Friday and have everyone pull together and get her up online was fantastic.

“It was bloody good of David Ellis CNZM to choose our New Zealand company to sell her – a real vote of confidence.  He’s a great support of the New Zealand industry and I am delighted that this confidence was well placed and we delivered. To achieve the result for everyone involved with Avantage is really rewarding.

“It shows there are no limits to what we can achieve, to have two international powerhouses bidding on her, who probably would have been also at a normal auction.  However it allowed Te Akau to move with haste which they needed to do, and at a fraction of the cost of having to put her on a plane. And, it’s nice for the horse to be able to stay at home in the stables where she was relaxed parading and comfortable. It’s a hell of a lot less stress and risk on the horse.

“Everyone is looking for efficiency these days and that’s probably the major advantage that selling online provides.  It can cost a lot of money just having horses in a paddock waiting for suitable sale dates to arrive, and that horses can be sold at a timely moment has probably been the biggest win for the site.

“It must mean a lot for her owners to achieve a result like that, on top of being able to race such an amazing mare – for her to sell for $4.1 million and establish an online world-record is incredible.

Martin also reported the website auction page for Avantage received just shy of 16,500 views from 7,500 individuals by the end of the auction, and the top countries that tuned in included: NZ, Australia, UK, Hong Kong, Singapore, China, Ireland, Netherlands, Brazil, Malaysia, the UAE, Japan and Germany. 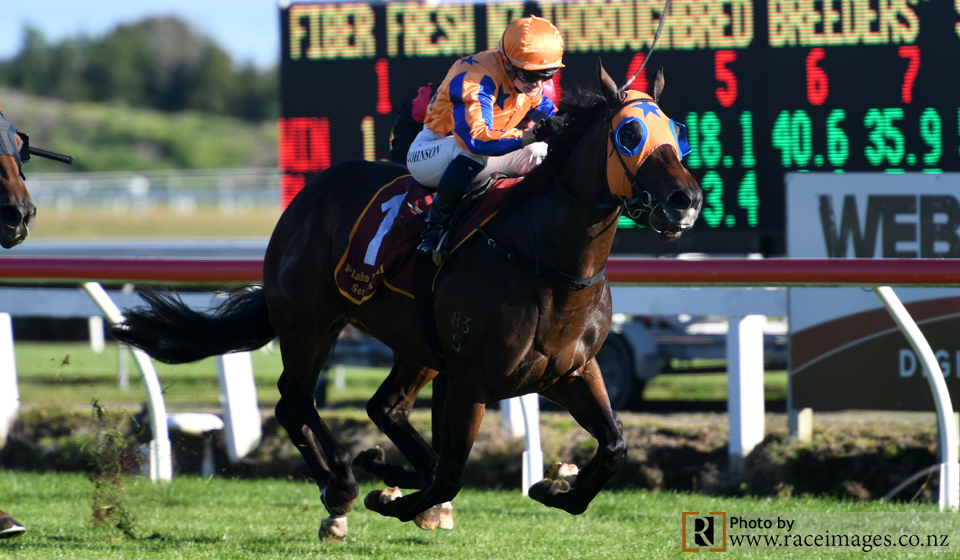 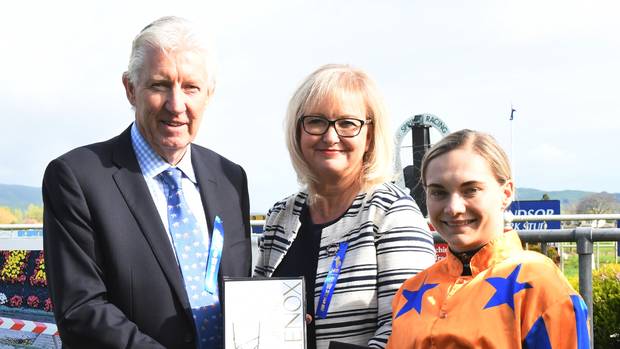