Once again, as is so often the norm, Te Akau Singapore trainer Mark Walker celebrated a winning double at Kranji on Saturday.

The first winner, Broadway Success, was bought by David Ellis CNZM at the 2017 NZB Ready to Run Sale.  He was specifically purchased to join our Singapore stable and was syndicated between a small group of Kiwi and Australian clients. It was his fifth career win in Singapore and, together with six other top three placings, he has now won almost $120,000.

Mark Walker heads the Singapore Trainers’ Premiership with 59 wins for the season – a lead of seven – and a huge 66 runners up and 57 third place getters.  He is on target to snare his fourth Singapore title.

Just when Singapore champion trainer Michael Clements thought he had bounced back into the reckoning with a long overdue double, a counter-attack from leading trainer Mark Walker has not taken long to neutralise the sudden awakening on Saturday.

As mentioned in an earlier story, Clements had fallen behind following an unusually quiet time in the last couple of months, but did well to stay in touch and keep his hopes of defending his Singapore champion trainer title alive with Harry Dream and Greatham Girl in the first two races, narrowing the gap on Walker down to five winners. 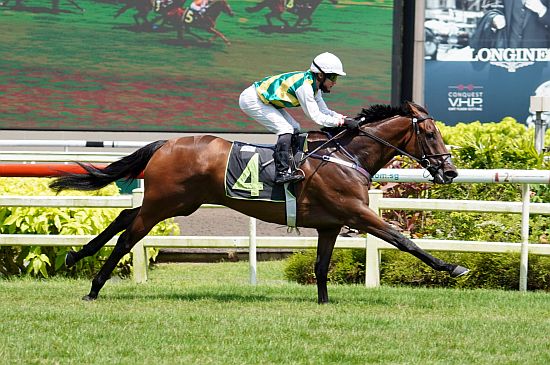 Walker, who has always had numbers to support him, said he was just in it to win as many races as possible. The title would just be a welcomed bonus.

“The horses are in good form and are winning races, that’s what matters at the end of the day.”

Of the two winners, Speedy Missile (Wong Chin Chuen) was arguably the trickier to carve out given the Smart Missile five-year-old was ahead of only one runner (King’s Speech) throughout and more crucially, was caught in traffic into the straight, not once but twice.

When animals weighing half a tonne are cut off at full speed, that usually spells the end of their winning chances. To get held up twice, Speedy Missile could maybe look at a place at best.

But with the likes of Lim’s Craft (Danny Beasley), Rocketship (A’Isisuhairi Kasim) and Winning Hobby (Krisna Thangamani) making heavy weather of it upfront, and none of them really looking like they could put the race to bed, all wasn’t lost.

As a gap materialised between Lim’s Craft and Rocketship at the furlong pole, Speedy Missile sped through like a bullet to go and finish in advance of stablemate Brutus (Jerlyn Seow Poh Hui) by 1 ¼ lengths. Lim’s Craft ran third another three parts of a length away.

Clocking 1min 9.84secs for the 1200m on the Long Course, Speedy Missile was at his second win for the Fairdeal & Ronald Lau Stable for prizemoney that has now hit around the $125,000 mark.

“Speedy Missile was unlucky halfway up the straight. He was held up a few times but he scored a nice win in the end,” said Walker.

“Brutus got squeezed at the start and got further back than anticipated but still ran well for second. Jerlyn did her best.

“She’s riding very well even if she has lost one kilo off her claim. It could have been her first treble (won earlier aboard Kiss Your Song, $59, for Shane Baertschiger in the $30,000 Class 4 Division 2 race over 1100m and Broadway Success for Walker).

“She has really come of age in the last couple of months. She’s also getting some outside rides from other trainers, which is great.”