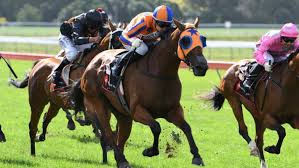 Congratulations to all our team members who have done such an amazing job looking after our newly crowned Horse of the Year, Melody Belle.

We currently have the reigning Horse of the Year in both New Zealand and Singapore. How rewarding is that for all the team? Well done team! These results are hard to achieve and it only happens when everybody does their job well.

Melody Belle in fact became Te Akau’s sixth Horse of the Year across our two stables – that’s quite some feat!

To receive four awards on Sunday night was pretty amazing and a big thrill for Karyn and me.  Also a big congratulations to Opie Bosson for being the Champion Jockey and of course to Jamie Richards for his Newcomer to Training Award.

While at the awards, it was also thrilling to learn that Mark Walker won three races in Singapore.  Mark is on fire winning 60 races already this season and is now 15 ahead in the Singapore Trainers’ Premiership.  A remarkable effort.

I read TDN (Thoroughbred Daily News) each morning on line – which has great racing stories. It was interesting to read the story of a stud farm that has only had 18 mls of rain this year.  That is less than one inch.  We have had 150 mls of rain at Te Akau Stud in the last seven days (that is six inches).

It would be great to get a break from this wet weather but while we get the rain, the grass continues to grow but the yards are too wet to continue with the docking.  Also it is incredibly frustrating for Te Akau Racing to have so many nice horses ready to race on good tracks.  But every September is the same.  We normally only get good tracks from about the first week of October except at Hawkes Bay or Ruakaka or Taupo.

So while we are very wet in the Waikato a lot of stud farms in Australia are in the worst drought in the history of their great country.  I feel sorry for them.  It must be terrible.

I always look forward to the middle of September when the leaves start coming out in the trees and our cherry blossoms start flowering.  Also I look forward to mid-September because the days are getting longer and the grass is starting to really grow. It needs to because we have about 2500 cattle to feed and the ewes have finished lambing and the lambs are starting to eat the grass as well.

Plus on the racing side we have just had the first two year old race and the team had Cool Aza Beel beautifully educated to win his race.  He was beautifully ridden by Troy Harris.

This is a race we have won twice previously – and gee isn’t Savabeel a great sire?  He can leave you an early two year old, a Karaka Million winner, an Oaks’ winner, a 2000 Guineas’ winner or a Cup horse – that’s the sort of stallion that impresses me.

Cool Aza Beel came home here to Te Akau Stud for a short two week spell yesterday.  He has grown into a quality colt.  In the next door paddock to Cool Aza Beel is No Limits, the Savabeel/Make a Wish colt who topped the Karaka 2019 Book 1 sale. He won his only trial very impressively.  He goes back into the stable on Monday.

We were also thrilled to see both Te Akau Shark and Probabeel race well at Randwick on Saturday. They are both on target for their upcoming assignments and both acquitted themselves well.

Te Akau Shark was second in the Group 2 Tramway and was ridden by Champion NZ and Sydney jockey James McDonald who also rode Probabeel. Both will relish their next step up in distance and James has reported very positively back to me on both horses. James used to be our stable rider here in New Zealand and our friendship goes back a very long way.

Also we are all very excited about Caliburn, who was recently purchased by me from Europe. He will have his first start in Melbourne on Saturday.  We are very fortunate to have a world class horseman in Craig Thornton at Flemington looking after him.  Craig is now a senior member of the Te Akau team. All reports are that Caliburn is really thriving.  He is racing over 2500 mtrs on Saturday and Damien Lane will ride him.

I also got a thrill out of seeing the half-sister to Melody Belle win at the trials yesterday.  Exaltation (Not a Single Doubt/Meleka Belle) is one of three fillies that I bought for a filly syndicate and she will be one of a big team of horses that we have racing at Riccarton in 11 days’ time.

Have a great week and GO THE TANGERINE!